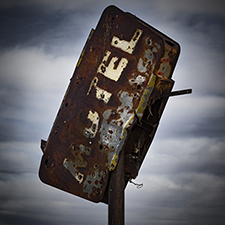 Many of those who explore Colorado prairies for old barns and crumbling farmhouses have passed by Cabin Creek, a few miles west of Last Chance. 5 acres consisting of an old 8 room motel with doors busted down or standing open, an old service station and 2 homes, one of which used to be a café and truck stop, as the old sign outside reminisces. This sign and the old motel sign are some of the bigger attractions for those who enjoy photographing relics of the past. The buildings are now behind a fence and some occupied, making them difficult to photograph and impossible to explore.

This property has been up for sale for a while, at least since 2016 as was reported by a few new outlets with “Ghost Town for Sale on Craigslist”. The property first took on the “ghost town” feel in the 1970s. The construction of Interstate 70 pulled traffic from Highway 36, reducing the number of travelers that would have stopped by Cabin Creek to fill up or grab a bite to eat. The property changed ownership a number of times since 2015, once for the price of $10; however, the late 1980s is the era of our focus at Cabin Creek.

I seek out abandoned places but since this one is inaccessible; I always just drove by. What made me go back, photograph it and search the history of it was a by chance discovery. One day some co-workers and I were talking about a company retreat and a number of us found the idea of staying the night in a “haunted” cabin intriguing. As we began to Google “haunted cabins”, a co-worker stated he had found one that was a ghost town and it wasn’t far away. “Ghost town!  How come I didn’t know about it?”, were the first words out of my mouth. So, I began looking into it immediately. What I found weren’t stories of supposed paranormal activity or even a place we could rent, but I did discover that this place I’ve driven by many times was the site of a double murder on Thursday, April 23, 1987.

Fugitives on the Run

Steven Miller and John ‘Doc’ Whitus Jr. escaped from the Correction Medical Facility in Vacaville, CA in February 21, 1986, both serving life sentences for murders committed in the 70s. By summer they were over 1200 miles away, east of Byers, CO at Cabin Creek. There they were hired, under aliases, by Russel Schwartzmiller, age 48, to remodel the previous truck stop into a home. Russel lived at the property with Grace Kuamoo, age 73. Miller and Whitus reportedly worked on the property for nearly a year before the event happened that created the reason for my interest in this location.

Schwartzmiller was rumored to be a survivalist.  According to those who lived nearby, he purchased that property because of its isolation so he would have a place to avoid others and store his ample gun collection. Like most survivalists, or what we call “preppers” today (as in prepping for the apocalypse), Schwartzmiller didn’t believe in keeping his money at banks and so kept his money on the property. While Schwartzmiller did this most likely in an effort to protect himself, it was what lead to his murder, On April 23, 1987 after working for them for nearly a year, Miller and Whitus murdered Schwartzmiller and Kuamoo, taking their guns, including .454 caliber elephant gun, $64,000 and left in a van owned by the now deceased Schwartzmiller . The bodies weren’t found until 2 days later, giving the killers a head start.

Two days after the bodies of Schwartzmiller and Kuamoo were found, a flipped van was discovered near Juniper Bay Campground by Holter Lake, near Wolf Creek, Montana. While searching for information about the van, the Lewis and Clark County Sheriff’s Deputies were fired upon and a 4-hour gunfight ensued. The van was identified as belonging Schwartzmiller in Colorado. The gunman escaped and police found polaroids they had, left posing with guns and making lewd gestures toward the camera. The men in the pictures were identified as Miller and Whitus.

5 days later, police tracked the fugitives to a trailer along Beartooth Road next to Holter Lake, 2 miles south of Juniper Bay Campground. A gunfight ensued. A few moments before there was an explosion and a fire engulfed the trailer home, a German Shepherd jumped from the window of the trailer. He would be the only survivor of those who had been in the building. After the ashes cooled, the fugitives charred bodies were identified by their fingerprints. It was determined that the explosion had been caused by a propane tank being shot. Authorities believed it was done by Miller or Whitus and expect the money that was stolen burned within the flames. A female who had been reported to be seen with the men may have been killed in the mountains after the shootout in the campground days earlier. Police did not make an effort to find her.

If you visit Cabin Creek, please respect the fact that it is private property and the owners do live on it. Please take pictures only from the road.